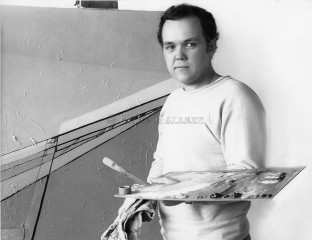 Born October 10, 1945 in Copenhagen, Denmark. Edsberg had his debut as a painter in 1966 at The Association for National art, Charlottenborg, Copenhagen. During the sixties, seventies and eighties Edsberg held exhibitions in his homeland Denmark, throughout Scandinavia, Europe, U.S.A., Mexico, Japan and Australia. His work is represented in numerous private and public collections around the world.

In 1977 Professor Alexandre Cirici Pellicer, president of The International Association of Art Critics said: "Soren Edsberg contributes in a very personal way to contemporary art," and The Council of The Mirro Foundation refers to Soren Edsberg as "a renewer of abstract art in Europe."

In 1987 Soren Edsberg moved with his family to U.S.A. He joined the faculty at Brigham Young University as an adjunct professor. In the nineties Edsberg produced and directed a series of medical/educational videos for hospitals, schools, universities and government agencies in U.S.A., Canada, Mexico and the European Union. Among those acclaiming Edsberg's educational productions are U.S. Senators Orrin G. Hatch, Edward M. Kennedy, former U.S. secretary of education Terrell H. Bell, and former assistant U.S. secretary for health James O. Mason who says that the video series have made "a significant contribution to health education."

Edsberg shared his efforts during the last part of the nineties with the Baby Video Library series, his photography, and preparations for the Hope Galleries. His photography project brought him to numerous National Parks taking thousands of photographs with a special interest in nature's details and light. The first Hope Gallery opened in Provo, Utah in 2001, leading to additional locations in Park City, Utah and the main location in Salt Lake City, Utah.

Although Edsberg has been a collector of art for nearly fifty years, he has spent most of the last twelve years in Europe researching, tracking and collecting art for the Hope Galleries and his ongoing private collection, and resuming with his own works of art for future display. 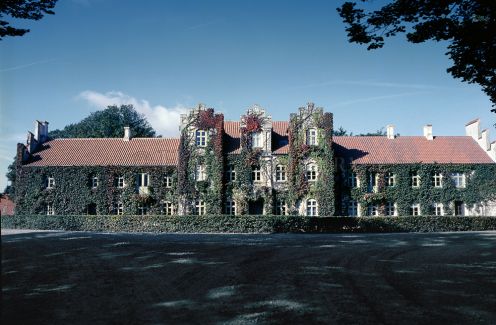 Edsberg's Residence before moving to the United States 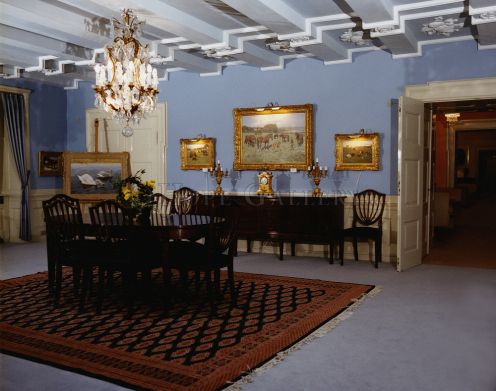 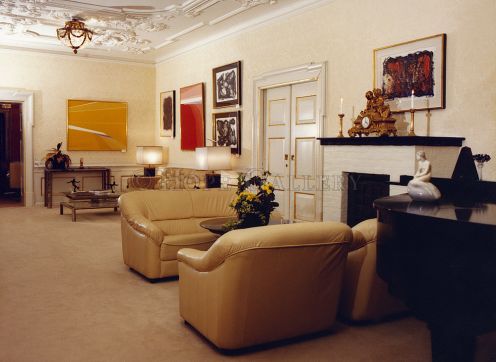 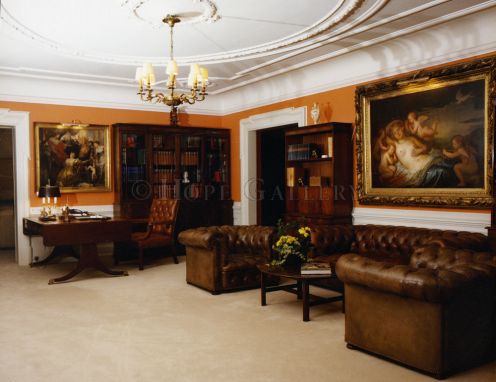 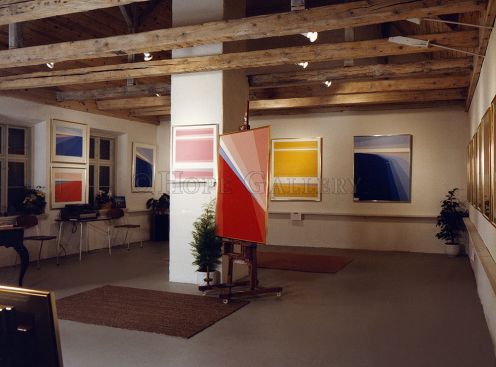 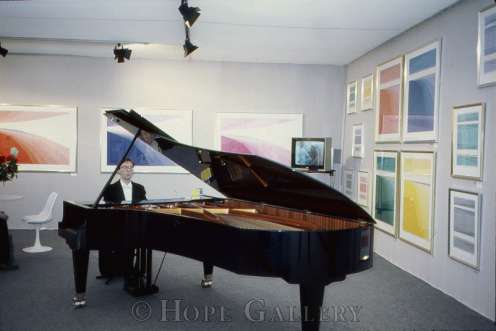 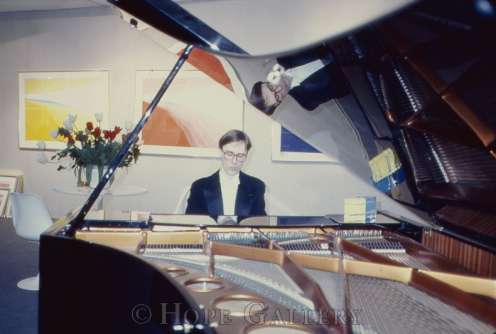 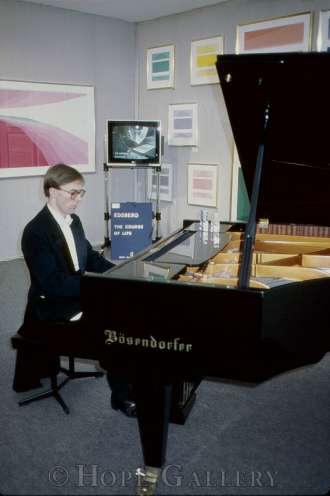 A world premiere on a new composition in three movements.
Title "The Course of Life" inspired by Edsberg's latest works,
performed by Swedish concert pianist and composer Kjell-Ove Dahlman.

We are at the races in the moment when the horse's hooves leave the ground. The exciting homestretch before the winning post.

Or we are watching the waterlilies in the pond, admiring their beauty, fleeting and yet eternal.

In short we are in the middle of a time of fermentation, at the exact point when photography and the art of painting impressionism were introduced simultaneously. Some artists wanted to stop painting because they could no longer see any point in their existence as painters. But then there were other artists who, on the contrary, felt inspired by the capability of the camera to preserve a moment of density.

Degas' racing pictures, Monet's half blurred water-lily pictures - the paintings of those important impressionists would hardly have come to exist - at least not as they are now, had not the camera been there to act as an intermediary between nature and the artistic mind.

What would a man like Andy Warhol have been if Marilyn Monroe had refused to be photographed? At least not the Warhol that we know.

Quite many of the younger artists of our time preserve the life experience of the moment by means of a camera - and afterward they pass on their experience. Some perhaps by directly depicting the photograph in painting, except that now it is done with the artist's living brush.

Still, others use the photograph only as a memento, a stimulus, a starting point.

**[But then there are artists who use the photography as a photography. Let it stand alone and speak for itself.. This artist may be the brilliant press photographer. But he may also be the painter who respects the photographed segment of the world too much to change it.

Soren Edsberg, whose abstract paintings are based on thousands of exact sketches of nature belongs to this latter group. "The photography as a genre picture" is his starting point. An attempt to return to the "trite" idyll, which may not be so trite after all.]

"The Beautiful" - is that important?

Discussing the idea of superficial idyll, well, to Soren Edsberg it is quite obvious that what he is photographing is the surface. The superficial beauty. But that in itself expresses an inner tension. Without the part of the iceberg that is under water certainly we shouldn't be able to see the part that is over the surface.

Let us be quite concrete and say: Soren Edsberg has come to realize that he cannot "photograph God. But then [he] can photograph His Creation."

Thus the quite elementary beauty enters his photographs. The brown leaves one Autumn day in the Deerpark. The rough beauty of the ship. The bridge across the Mill Creek. A herd of deer at rest. The nearly bursting buds on a Spring day. Anything that may express life.

Maybe the drunken tramps of the "Bowery" in New York might provide a good starting point for his photographs. Others have done that so well. Maybe the ragpickers of the dumping ground might provide a better basis for a brilliant photograph than the refined network of the trees as seen against a wintry sky.

However, that is not what he chose. We have got misery in this world, and it is important that some people depict it. In a journalistic, precise, and engaging manner.

Edsberg strives - as a photographer - to engage us in that beauty which otherwise (to quote Shelley) "doth pass by our dull senses." To commit us to what we have. He wants to show us that it is also possible to preach by means of .... a camera. 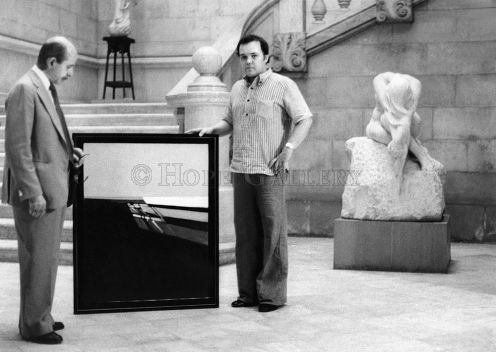 The artist at the official presentation of his work "The Course of Life"
at the Museum of Modern Art (Museo de Arte Moderne, Barcelona, Spain).

It seems worthy to consider, in effect, their particular aspects. The paradox that a strictly flat painting ex- presses an evident move, the sensation of space. The other paradox that a geometrisized construction ex- presses an intense mode, forcefulness. For one thing or another, I judge that Soren Edsberg fulfills a very personal contribution to the whole of contemporary painting.

Concerning a painting by Soren Edsberg: It is a very characteristic painting of his latest works, which presents a new call in the abstract art at present in Europe. Its dynamism in spite of its deeply geometric features, it reflects in our opinion the will of expressing at the same time a spiritual strain and the most expositive clearness.

Thus by means of the painting Edsberg succeeds in plastically manifesting the profound but also difficult and obscure richness hidden in the verses of the Bible, of which his pictures do not pretend to be an illustration, but rather are an interpretation which by means of colors - especially blue and red - and geometry - lines and spaces - manages to communicate with the surrounding world through another medium, viz. the painting which made him start on the word of the Bible. Maybe Edsberg's painting owns its greatest importance to the fact that he has realized that there are certain people who understand religion the best rather through the medium of perception than through reasoning and meditation.

The works exhibited here by Soren Edsberg are convincing due to the obsessional repetition of certain fixed co-ordinates, something that is founded, maybe, on a wise and firm belief. A man of deep rooted religious convictions Soren Edsberg is always working with fervent zeal to improve mankind.

His non-figurative works attune the inspiration of the painting with that which with more swelling accentuations swallow up some coloristic arrangements consisting of large spaces defined by planes and perspectives with a lucid expressiveness whose inner rhythm suggests as it were a free counterpoint, some lines austerely disposed in accordance with rules borrowed from geometry.

Danish painter, completely obvious metaphysical dis- quietude, the Gaugenic question, "Where do I come from?" - "Why am I here?" and "Where am I going?" plastically defines his "Course of Life," spaces with warm colors, rectilinear intersections that produce diversified perspectives in his works, explanations fully justified by the prevailing geometrical composition, lines, roads leading towards infinity, beyond the compass of man's objectives, interrupted spaces, the impossibility of progression, synthesis of the composition of the prevailing intention, pure strength of character.

Soren Edsberg is concerned with the life hereafter. His pictures possess or strive to attain a transcendentality that is not content with the simple plastic expression; through his art he centers his attention on man's post mortal eternity. An urge that distinguished great artists and poets of the past and around which the Danish painter concentrates his entire existence.

Edsberg is a Danish painter with a profound and passionate religious understanding. He is being inspired by the Bible and attempts to plastically interpret those verses that refer to roads, distances, boarders, and paths, and entitles them with elements that intersect like paths or rather shoot across the pictures. Now and then it seems as though certain of the pictures are trying to show us a calming mystery, pleasantly static.

Unique Exhibition by Soren Edsberg, the Painter, in the "Galeria Matisse." Edsberg is an important figure within modern painting. In Edsberg's present exhibition, which is entitled "The Course of Life," he presents some of his own reasons for his intention, in which he offers some simple philosophical reflections, concerning man's existence on earth. And in the midst of man's anxiety to find his way Edsberg tries to tell us what it is that we are trying to get out of life. The exhibition in the Galeria Matisse is concerned with the problem of seeking the "ways." The basic motivation has already been explained; it is the "ways." The plastic problem has been solved with crystal clear lucidity, cleanly and plainly, in large spaces of one color in plans of a severe geometrical order. Always with a rectilinear path that leads to a perspective in which the long yearned for solution may be contained. Edsberg's art is intelligent and is performed with the mathematical severity of the geometrical figures with bold strokes of the brush, generally in one color with varying tones. The colors are bright. Strong red, blue, and pink. And the intersecting linear color describes a diagonal course or in one way or another produces a dynamic force and a feeling of flight which the artist achieves by means of the most expressive methods of modern painting.